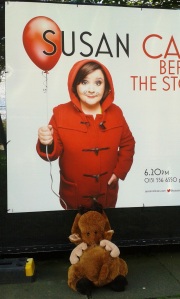 Some may call it a guilty pleasure, but I have no such feelings about Strictly Come Dancing. I feel no guilt or shame about declaring my allegiance to this wonderful, feel-good show.

And, hey, I’ve finally managed to put a pic up and downsize it, moving it about is tricky but then I’m a moose not a sheepdog.

So, to bring my international readers up to speed. The brilliantly funny comedienne Susan Calman is in this year’s Strictly Come Dancing on the telly, she’s also the first openly gay female celebrity on the show. Oh, there’s been a number of openly gay male celebrities on the show, never a fuss about why they weren’t paired up with another man, but as usual it’s another matter for a woman and apparently some on social media have criticized her for dancing with a male partner. WHAAAT!!!! Get over yourselves people! How narrow-minded that a gay woman should have to dance with a female partner, and (from what I’ve read on the BBC News website) it’s the gay community doing the criticising! Huh?! Can’t you just share the joy emanating from Susan? The obvious glee on being partnered with Kevin was pouring through my telly, there was even an emotional wee tear. She’s even admitted to having a picture of him – on her fridge I think she said.

Well, I did say last week there was a rant coming up, I just didn’t realise this one would jump the queue, but it just really irked me.

I wonder if they’d ever consider having a moose on the show? I take it I’d have a lady partner, oo, Karen Clifton or Janette Manrara please, both seem like really good laughs. Mind, who knows? Kevin Clifton would be my top choice (yes, I too have a Kevin-thing going on) or Pasha, we could make a dashing duo!