Alas, some of Edinburgh smaller drinking houses may not survive the pandemic, so says the local press, and anyone with experience of how “cosy” they can be. These little gems are all nooks and crannies, no social distancing possible, and when they’re busy, no personal space either! It would be a real shame to lose them as some are very old (we’re talking Auld old) and are part of the architectural and historic fabric of the city.

The Halfway House up Fleshmarket Close behind Waverley Station is a very sad victim to new regulations. I’ve sipped many a fine cider and real ale there over the years, right back to my college days. It’s one thing if a pub goes to the wall through lack of clientele (though still a shame), but quite another when the business would be fine but for insurmountable circumstances.

Two legendary folk bars of Edinburgh, The Royal Oak and Sandy Bell’s are both still shut; it would be a major loss for the Edinburgh folk scene if either failed to re-open. Rebus’s haunt the Oxford Bar hasn’t been able to open it’s doors again yet and The Auld Hoose (home to the largest bowl of nachos ever!!) remains shut for very obvious reasons to anyone who’s tried to get to the toilets there on a busy evening!

Two great real ale pubs that have reopened are the Dagda Bar (the small square blue-fronted one up Buccleuch Street, you know it but never remember the name!) and the Bow Bar, not as small as the Dagda, a nice tidy size and very much an Edinburgh institution. Still doing off-sales as well, the Jolly Judge has re-opened as much as they can, having the outside tables in the close helps. Indeed, pubs are really making the most of any outside space (pavement) they can claim.

The three bars up just off Teviot Square, the Doctor’s, Boteco Do Brasil and Paradise Palms have all re-opened, usually completely packed out at this time of year, they’ll be missing the Fringe. Oo, and another old folk establishment, Captains Bar just along on South College Street is open; turns out they’ve been carrying on musically online during the shutdown, good for them! 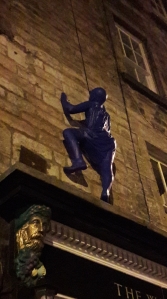 I shall leave you with an oddity that’s appeared climbing the wall above an old drinking establishment in town. Can anyone identify the pub from this little teaser? Happy to report it’s open again.

If there’s a favourite Edinburgh watering hole that you’re hoping has survived, I’ll be happy to investigate!