I had been looking forward to the re-pairing of David Tennant and Michael Sheen on telly Wednesday night in Staged but it turned that would have to wait, there was even better stuff on the box, even better than the first fifteen minutes of an episode of Buffy! I know, what could possibly be that good?! American Graffiti that’s what, and maybe this time Curt would get to meet the Blonde in the T-Bird at the end, poor guy; I have to watch it to the end just in case, you understand, yeah?

And who, you may be wondering, will make a fine moose? That would be Curt played by a young Richard Dreyfuss (boy, does he look young but he was actually in his mid-twenties). Curt has been given a scholarship from the local Moose Lodge to enable him to go to college, where he’s flying to in the morning after one last night out with his friends. Ironically, the line is said one moose to another not knowing that whilst Curt is distracting them, hoodlums who he’s fallen in with are robbing the pinball machines in the next room. Well, not so much fallen in with, more coerced to go along with.

Yes, I would be happy to have Richard Dreyfuss as an honorary moose, he’s great. I wasn’t aware of him until I saw Down and Out in Beverley Hills in the mid Eighties, it was sometime after that that I first saw Jaws and American Graffiti on video (the days of Blockbuster!), yes, I hadn’t seen Jaws. I was a tad too young when it came out in the cinema, I had parents who were real sticklers on rules, and really Disney was more my bag at the time.

By the time I saw American Graffiti was as mythical to me as Wolfman Jack was, within the film; I knew the soundtrack well, it’s all great rock’n’roll songs around in 1962 when the film is set. Apparently George Lucas (director and co-writer) had specific songs in mind for every scene – like, way before Tarantino, an influence?. I was not disappointed, Richard Dreyfuss is just one in a great ensemble that included a young Harrison Ford (four years before Star Wars) and one Ronny Howard, who just a year later became Ritchie Cunningham in Happy Days (trust me it was really big back in the day) before turning director in 1980.

In the late Eighties Dreyfuss made Stakeout and Always, two movies I loved at the time that I really should check out again. Umm, I think of the two Always will be the better one (well it does have John Goodman in it), I don’t reckon Stakeout will have aged well, it was a good buddy cop movie though. Oh, and another movie with Dreyfuss from my wild video-watching all-nighters was of course Close Encounters of the Third Kind. Classic!

I leave you with a pic of my precious….. 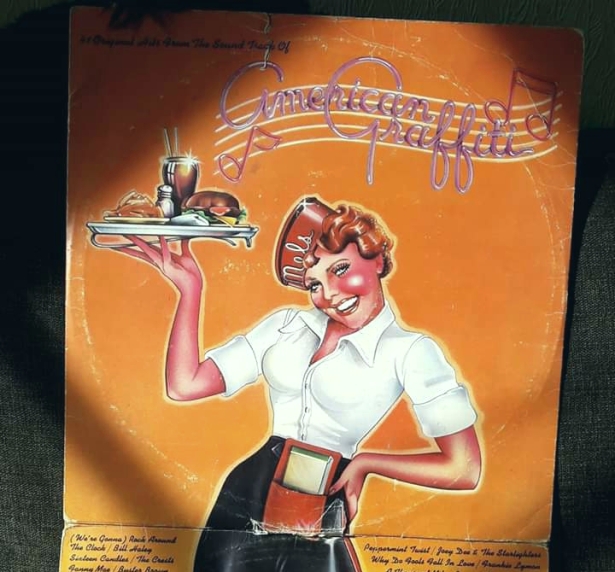