This award I would give to Aidan Goatley, he really is a lovely chap. I first saw him doing his show Ten Films With My Dad at the Voodoo Rooms in 2013. Since then there’s been The Joys of Retail, Mr Blue Sky, The Year of the Goat and this year’s Aidan Goatley is the Vicar’s Husband. Each year he has still also done Ten Films… which I love, it probably helps being a similar generation so the films are very much part of my own cultural references.

There was just one fairly obscure old black and white war film, with a young Thora Hird, that I didn’t know; I took a friend to see the show last year (any excuse to go back again) and she creased up in hysterics as she immediately recognised the film because of the young Thora Hird. On thinking, that same friend also almost ended herself at Year of the Goat when Aidan was slagging off his wife’s hometown, it only turned out to my friend’s hometown too! (she did agree with him)

You will have never seen a rant ranted as politely and so Britishly as Aidan Goatley rants, and I do find myself nodding and in fits of giggling agreement, for example, “street food” – if it’s indoors how can it be “street food”??! Totally with him on that one, a little favourite rant of my own in the last year or two. Oo, and Avatar, don’t get me started!! It’s wonderful to hear someone able to put voice to my own rants with so much eloquence.

I went to see this year’s new show The Vicar’s Husband  at Sweet Grassmarket and thoroughly enjoyed it, and not just because it’s in an air-conditioned room! That, of course, is a bonus, but on the other hand Ciao Roma did have the most sumptious ice cream to aid cooling. This year Aidan is also doing a few Ten Films … as podcasts with a different guest each time to chat about films, but sadly it’s also the last year he’s going to do Ten Films… So for one night only he’s doing Ten Films With You Pricks a look back at some of the horror stories of his time performing it. I have kinda mapped out my last few days of Fringe but, oo, I may have to work some jiggery-pokery to fit it in.

So if you happen to read this in Edinburgh before 25th August 2018, you still have a chance to see one of my favourite ever shows! 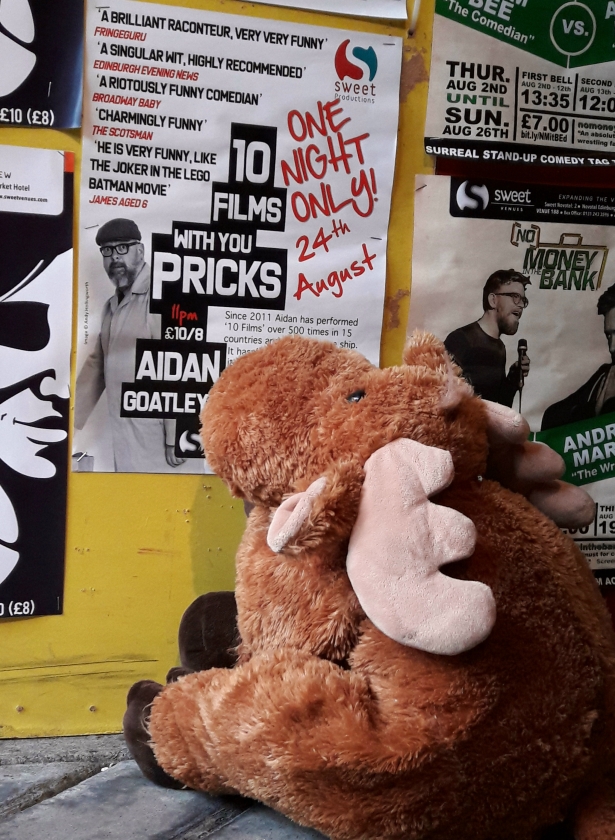