Evening, peeps! Friday evening and I’m home, drinking alone, tapping my thoughts down. I could be out, you know. I could be in The Pond listening to the dulcet harmonies of Carl and Scott; I could also be wandering lost in Leith trying to locate said Pond, I’ve never been there. No, I intend to write this post, this post that I intended to write late last Friday night but was side-lined by a need for more music (til after 3 in the morning).

So last Friday night I was back in the Voodoo Rooms to see Logan’s Close supporting Black Cat Bone. Crikey, it’s almost a year since I was there for the launch of their EP Fried Bangers there. But what was this? A keyboard on stage? Ummm, not sure what to make of this development. A favourite band changing it’s line-up has connotations of a pub “being refurbished”, ummm. I remember way, way back when Thin Lizzy brought in keyboard player Darren Wharton for their Renegade album and tour in 1981 (first gig I ever saw!) I was dubious but it was the start of the 80s and keyboards were a thing. I actually quite like the Renegade album but it’s not like classic Lizzy, but hey Phil Lynott’s voice was my passion. Then I recall the last time I saw John Martyn perform around ’92, ummm, I remember wishing someone would shoot the saxophonist! I do like sax, Reuben Legge, case in point, but the saxophonist that night just would not shut up. He was up in the mix and played continuously through everything (I like my sax sparse and selective) Aargh!

So there I was, supping a half of Joker IPA, wondering if this could be the end of my crush on the Close. First number, Work, hmmm, well that worked rather well! Just enough, not too much, a nice touch. I don’t remember the name of the second song but I know it’s one that sounds like it belongs in a Tarantino soundtrack, again, keyboards like a bowl of baby bear’s porridge. New songs thrown in too, nice! A fine set, In The Morning and I Want You particularly brilliant (Scott’s vocals on I Want You are sooo good) Yes, I totally approve of the new chap, except, dude, the trousers, turning them up so high with white socks, no, really.

And what of the headliners Black Cat Bone? A great, bluesy, sleazy, pretty darn sexy sound, I’d reckon not so much black cat, more dirty ol’ ginger tomcat heading out on a night of fighting, f**king and caterwauling ’til dawn. 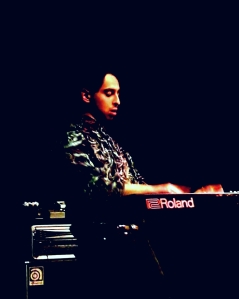 And here’s a look at the newest member of the Close doing his stuff….