Not long in from seeing Palimpsest in the Balcony room at Gilded Balloon Teviot. I quite like the irony of having to head to the lowest level to reach the Balcony, that’s just to queue then there’s a different set of stairs to get to it. The Balcony used to be one of the hottest rooms of the Fringe, yay, thank god for air-conditioning units.

Palimpsest, just googled it, apparently it’s something reused or altered but that still bears visible traces of its earlier form, ah, that makes sense! I’d never heard the word before, never heard of a pomelo before today, either (it does look very like a grapefruit);a day of discoveries! Palimpsest is also the name of a play by Alex Lacey, which she also stars in alongside Rob Kemp (he also has his own show Rob Kemp: Agenda reviewed last post).

Yes, I did see Palimpsest on the back of Agenda, good decision, loved it too. The flyer calls it a meta romcom, it’s meta and then some. If you enjoyed the film Free Guy that’s a good starter to liking this. The play starts normal enough, each actor delivers short monologues then the other joins in with the same line and takes over with their own monologue……until Jess tells Jim to stop interrupting her! The initial play is funny enough, but when the characters go off script, wow, its brilliantly written with really fun ideas – your head may hurt a bit after seeing this! Just go have a drink somewhere, you’ll be fine (the Library bar doesn’t have a lovely stock of real ales anymore, sadly, so head somewhere else if you want a good ale).

This career off-piste into a wickedly funny existential crisis reminded me of Phil Jupitus‘ play Waiting For Alice at a Fringe many years ago about Tweedledum and Tweedledee, but that was quite melancholy and sad, it’s the existential bit that’s similar. Both Palimpsest and Agenda are on until the final Sunday, time enough to fit them in!

My, Mr Will is a popular fellow! I put up a pic of him and myself from Sunday night on Facebook – never had so many likes for a pic before (I’m telling myself they’re all charmed by my good looks😆). But what’s this? Sunday night? Why didn’t I save my return visit to WSSMGSVI until the last night of the Fringe as is my usual? Because he was deserting us a day early, that’s why! Not only that, but Sunday night’s show was the last ever (yeah, that’s right not just of this Fringe but all Fringe) of Spooky Midnight Ghost Stories! What! No more Spooky Midnight Ghost Stories to give me the willies? No more adventures for Louloulou and Clarence? Well, not at the Fringe anyway, but I do believe it’s not the last we’ve heard of them…………

What a great finale it was to a brilliant run of these last six years. Sillier, spookier and surrealier than ever, yes, I’m having surrealier as a word, bite me! We oooed and aaahed, screamed and shrieked, we egged Will on as he tried to warn us of impending doom, he beguiled us with his tales, neatly lacing them together by the end. The end was met with rapturous applause, as were his many thanks to crew, friends, everyone at Gilded Balloon Teviot, any time he paused basically. Some lovely person even made him a cake dripping with blood (strawberry icing) to mark the occasion.

I took my leave going on for two o’clock, as the survivors headed for one more drink to see Will off. Oh, I was tempted to join them but I was also feeling very knackered from too many late nights and early mornings with my houseguest. Ah, the end of another era, but such is the nature of the Fringe.

So, what did you do on the final night, Brucie? 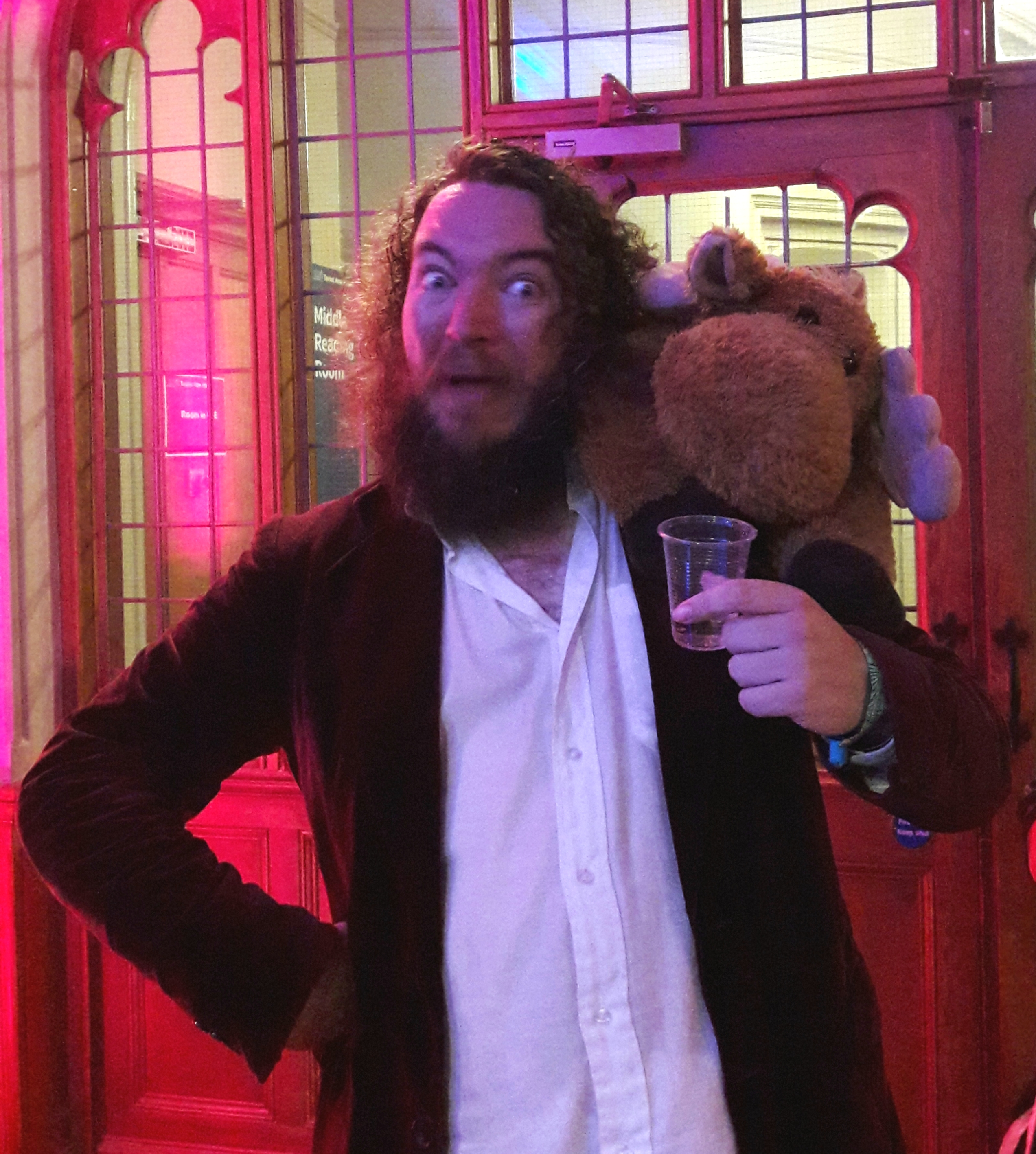 I can’t believe I haven’t yet given a mention to Russian Roulette, how remiss of me! Yes, they’re back again, the new, improved version, well, it’s an upright roulette wheel, more visual I guess. No longer down in the hidden warren in La Belle Angele, Russian Roulette are in the Balcony room at Gilded Balloon Teviot at 10.15pm (which gives Mr Seaward just forty five minutes before he’s back on stage for more Spooky Midnight Ghost Stories!). Be warned, it is a tad warm in there, grab a cold drink to take in with you.

The evening I went Crime And Punishment was taken for a spin. The play begins as normal, then the horn sounds, the wheel is spun and things get odd! The number landed on dictates how the play progresses – there are thirty seven bizarre ways to proceed with titles like Borscht Surprise, Beard Ban and I’m Stuffed, luckily, our host Will Seaward is on hand to explain what each means to our unfortunate actors. Our brilliant ensemble have to battle on through the play never knowing when the horn may sound again to add more confusion to the plot.

Yes, this is as bonkers as it sounds and more!! Our players are most excellent, a seriously talented troupe. Really, you will laugh your socks off! Oh, and the lovely Mr Sullivan Brown is usually flyering near Bristo Square before the show, do go say hello.